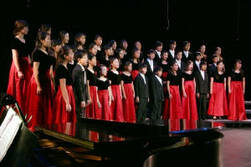 
This choir group will perform at community concerts, Christmas concerts in December and annual concert in May, and at events that require the full choir membership.  Concert Choir group will have the opportunity to travel, domestically and internationally. Over the years our members had had attended concert tours such as: